Testament to the value of This is my Land 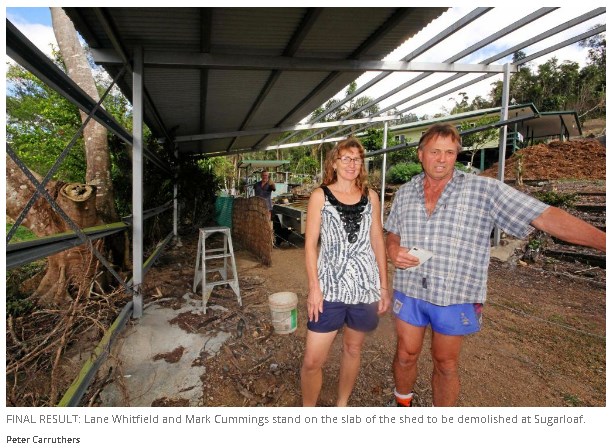 Mr Cummings and Ms Whitfield land owners in Sugarloaf, Queensland have been battling for a resolution to a dispute about sheds they believed to be illegally erected on their land.

The couple from Newcastle, NSW purchased the land with plans of building a new home and retiring to their beautiful land on Dominica Dr in Sugarloaf, Queensland when a dispute began over the understanding of where the boundary line of their property actually was.

Their neighbor (Mr Hurren) built two sheds that encroached on their block’s land and that is where the battle began. 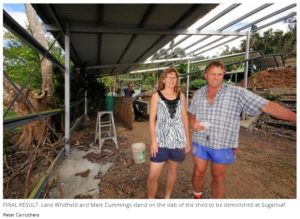 After 2 long and arduous years battling with their neighbor in the legal system ended with Mr Cummings and Ms Whitfield coming to agreement with their neighbor prior to a hearing had been slated for August 16-18 in the Townsville Supreme Court  resulting in Michael Hurren withdrawiing his claim to the land.

Mr Hurren was given 30 days by Justice North of the Townsville Supreme Court to seek a demolition permit from the Whitsunday Regional Council.

Mr Cummings said he and Ms Whitfield had sold all their belongings to pay solicitors.

“Then that money ran out and we decided we have got to do this ourselves,” he said.

“We have to fight for our land. If you don’t fight for it, they get it.”

Ms Whitfield said she was happy with the decision which was “what the fight was all about”.

The couple sought advice from prominent Maroochydore land owner Peter Wise who battled council for 11 years to remove an illegal swimming pool built on his land.

“Without his help, we would have given up and gone back and offered them whatever they wanted,” Ms Whitfield said.

The edited content above and image sourced from a story written by Peter Carruthers of The Whitsunday Coast Guardian.
To read the full story please visit https://m.whitsundaycoastguardian.com.au/news/sugarloaf-land-fight-resolved/3213663/